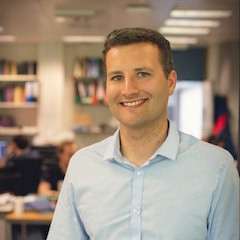 I was born in Wensleydale, North Yorkshire, UK, in 1981. I obtained a first-class master’s degree in chemistry at the University of Manchester (2005), where I was awarded the Royal Society of Chemistry prize, the Degussa award, the Sigma-Aldrich prize, the Glaxo prize, the Eric Braithwaite prize, the Swan prize and the Merck Sharp & Dohme award. I then completed a medicinal chemistry internship at AstraZeneca, Alderley Park, before returning to Manchester to complete my Ph.D. (2009) and a short EPSRC Doctoral Prize postdoctoral fellowship with John Sutherland FRS. In 2009 I was awarded a Harvard Research Fellowship to work with Nobel laureate Jack Szostak FRS at Massachusetts General Hospital, Boston, USA.

I returned to the U.K. in 2011, joining UCL as a lecturer in the chemistry department, where I am currently Professor of Organic Chemistry and an Investigator of the Simons Foundation Collaboration on the Origins of Life.

I have been awarded various prizes and fellowships in recognition of my research, including the ISSOL Stanley Miller Award (2011), the SET for Britain Roscoe Medal (2012), first prize in the Origins of Life Challenge (2012; jointly with John Sutherland FRS), an EPSRC Early Career Fellowship (2013), a Bürgenstock JPS Fellowship (2015), the Thieme Chemistry Journal Award (2015), a Center for Advanced Studies Fellowship (2016) and the RSC Harrison-Meldola Memorial Prize (2019).